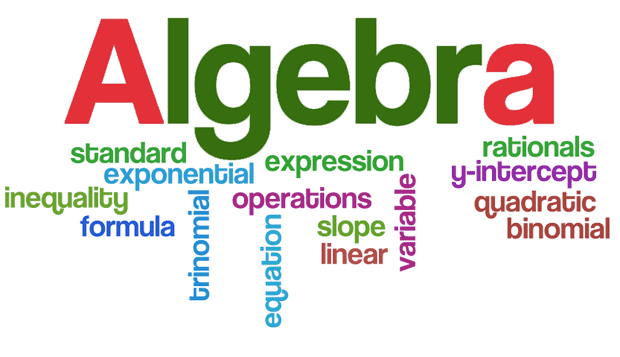 Notice the "middle terms" cancel, and we're left with what's called the difference of two squares.
In general, (a + b)(a - b) = a2 - b2.  Also see the basic factoring and more factoring sections.

Another method that might work (if we're lucky) is called the grouping method. This works by grouping up equal size blocks of terms and factoring out a common factor from each, then hoping the "left-over factors" are equal. That's where the luck, or sometimes skill, comes in.

An equation has to have an equals sign, as in  3x + 5 = 11 .  It's two expressions set equal to one another.
A solution to an equation is a number that can be plugged in for the variable to make a true number statement.

But how to start with the equation, and get (not guess) the solution?
We use some principles of equality, such as:
Adding the same thing (number or variable term) to both sides of an equation
Subtracting the same thing (number or variable term) from both sides
Multiplying or Dividing both sides by a non-zero quantity.
These all keep the equation "balanced" like a scale.

The thing that makes this equation linear is that the highest power of x is x1 ; no x2 or other powers, no variables in the denominator, and no square roots or other funny stuff.