DIFFERENCE BETWEEN MAN AND WOMAN 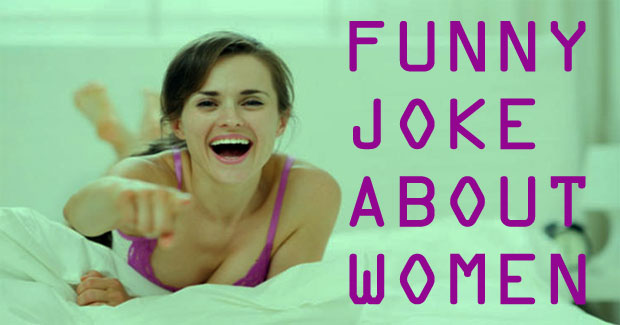 
JOKE ABOUT WOMAN AND WIFE

Women who sit on judges lap, get honorable discharge.
Women find men more attractive when they notice other women looking at him.
Women drivers are like stars in the sky. You can see them, but they can't see you
If women are bad at parallel parking, it's only because we've been constantly lied to about what 8 inches is.
The world thinnest book has only one word written in it : EVERYTHING. The book title is : WHAT WOMAN WANT.
The first ten years of a girls life is spent playing with barbies. The next ten years is spent trying to look like one.

If men can't focus on two things at once, then why do women have b0obs?
If all men are the same, then why does it take a women so long to choose.

It’s not true that married men live longer than single men. It only seems longer.
The man approached the very beautiful woman in the large supermarket and asked,  “You know, I’ve lost my wife here in the supermarket. Can you talk to me for a couple of minutes?” “Why?” “Because every time I talk to a beautiful woman my wife appears out of nowhere.”
A husband and wife were golfing when suddenly the wife asked, "Honey, if I died would you get married again?"  The husband said, "No sweetie."  The woman said, "I'm sure you would."  So the man said, "Okay, I would"  Then the woman asked, "Would you let her sleep in our bed?"  And the man replied, "Ya, I guess so."  Then the wife asked, "Would you let her use my golf clubs?"  And the husband replied, "No, she's left handed."

A little boy says, ‘Dad, I’ve heard that in some parts of Africa a man doesn’t know his wife until he marries her.’ ‘Son,’ says the dad. ‘That happens everywhere.’
A man says to his friend, “I haven’t spoken to my wife in 18 months.” The friend says, “Why not?” The man says, “I don’t like to interrupt her.”
Make love, not war.  Or if you want to do both – get married!
Women look at a wedding as the beginning of romance, while men look at a wedding as the ending of romance.

FUNNY JOKE MISCELLANEOUS
Q: How much money do you need to satisfy a woman?
A: It is always just a little bit more.
Q: What's 6 inches long, 2 inches wide and drives women wild?
A: A $100 bill.
Q: What's the difference between a girlfriend and wife?
A: 50 lbs.
Q: What do you call a woman with an opinion?
A: Wrong.
Q: Why are married women heavier than single women?
A: Single women come home, see what's in the fridge and go to bed. Married women come home, see what's in bed and go to the fridge.